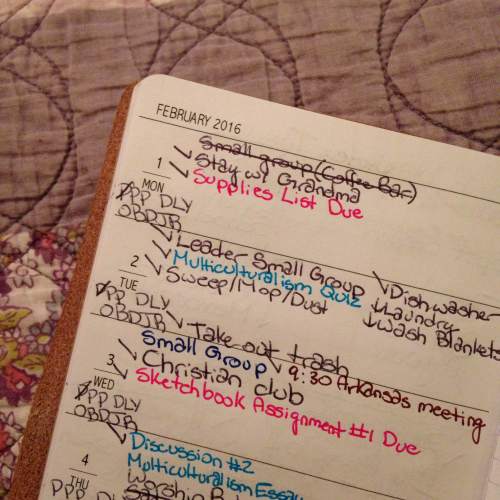 I’m a planner. Yes, I know that if you know me that sounds completely bogus, but hear me out. I like planning. I sit for hours doing research and making big, grand plans for the next couple years. And then within two months I have forgotten about them. This is a regular cycle for me. For example, a few years ago I made this large plan that consisted of finishing both my Bachelors and Masters by June of 2017 and also going on three different overseas trips in that time. However, let’s just say that my plans changed along the way.

I just began another semester and before the first day of class, I was praying non-stop that I’d enjoy it and be able to remain focused until the end. So far, everything is going according to plan and I actually love all of my classes.

The classes that I am taking this semester are Ceramics and Drawing. The reason that I get to take such fun and somewhat random classes is because I just needed some electives to finish up my degree. On the first day of class, however, I suddenly felt scared for the semester. I was the only person in either class with zero previous experience. I don’t consider myself an artist. I consider myself a musician who is taking art classes in order to expand her horizons.

I went home that night feeling slightly dejected and asked those around me to pray for me. Later that week, everything changed when we started diving into the material. The specific assignments were leveling the playing field and my skill sets were not noticeably any worse than those of my classmates. I even received a compliment from my Ceramics teacher on a vase that I made. This thoroughly lifted my spirits and put me in a new mind set for the rest of the semester.

But this past week, I also started planning again. I have a habit of quickly becoming bored when life starts to feel mundane. In those moments I tend to start thinking about what my next big world changing adventure could be. I start feeling like I want to do something more than simply make a vase in Ceramics or draw strange portraits of my classmates in Drawing.

However, last night I was reading a devotional and it was discussing how we want God to do mighty things and that we expect to see Him in the large things. BUT He is God. He is everywhere. Not just in the large plans that make me giddy and excited. He is also in the everyday mundane. He is there when I am in class. He is there in our day-to-day relationships. We need to take those parts of our lives to Him as well. He wants us to expect Him to show up in those moments as well.

This past Friday afternoon I was feeling lonely and alone. God knew just what I needed because that same evening one of my closest friends texted me asking if I was interested in hanging out the next day. We proceeded to spend over ten hours together running around town, drinking coffee, and watching movies. Spending that quality time with her was exactly what I needed to replenish my soul. She is one of a few friends that God has consistently used in my life over the past year. This weekend He used her to remind me that He is always watching over me. He’s pretty wonderful like that. He knows exactly what we need exactly when we need it.

Yes, I am still going to move forward and make those amazing plans for later this year, but for now I will make more of an effort to see God in the here and now. I will let Him show me how making vases, drawing portraits, and going out to coffee will change my world. And hopefully the world of those around me too.